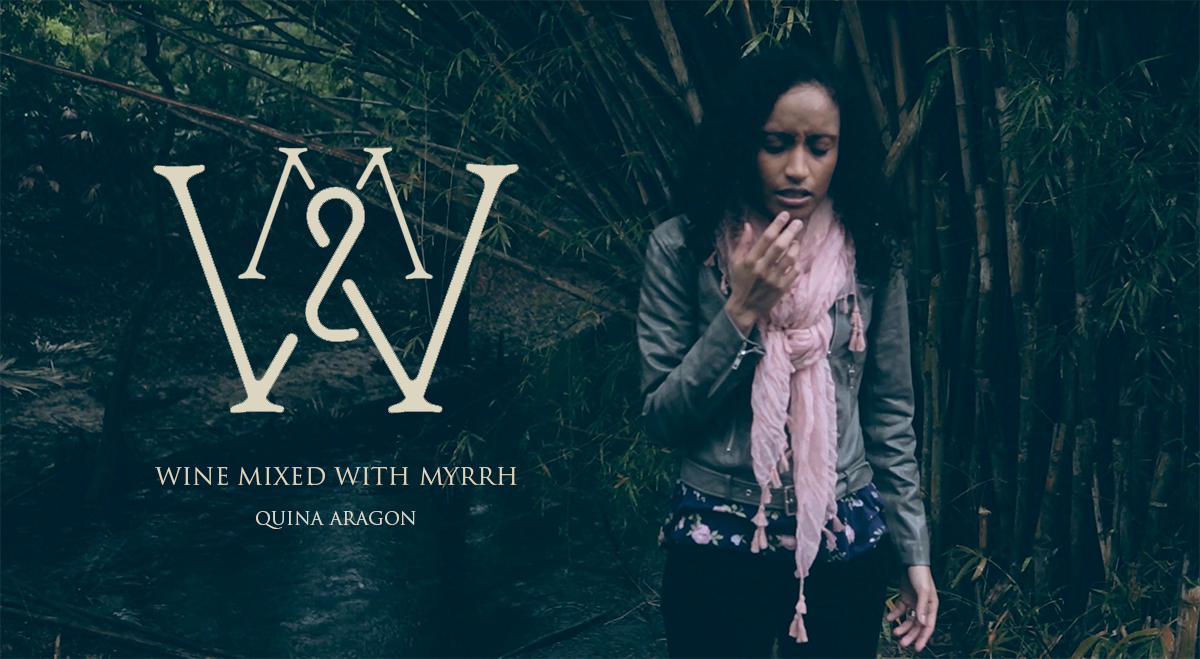 Since Holy Week is a time when many reflect on the crucifixion of Jesus, I thought it would be fitting to release my spoken word video “Wine Mixed With Myrrh” along with the downloadable track on the music page. I pray that it encourages you to worship the Savior who embraced the full pain of the cross and the Father’s wrath for our sin.

You can read the lyrics to the poem at the bottom of this post. The poem is based off of two parallel verses–Matthew 27:34 and Mark 15:23–which tell of how Jesus was offered a drink of wine mixed with myrrh at the cross, but He refused to drink it. The poem is the fruit of my studying these passages and reflecting on Christ’s determination to suffer to the fullest degree while on the cross…for sinners like me!

“…they gave Him wine to drink mixed with gall; and after tasting it, He was unwilling to drink.” Matthew 27:34

So, what is gall (Matthew 27:34) and what is myrrh (Mark 15:23)? Gall is any ingredient with a bitter taste. Myrrh is a specific kind of gall, a bitter tasting narcotic. In Matthew 2:11 we see the wise men giving baby Jesus myrrh because it was an appropriate gift to give a king as anointing oil. But myrrh had other uses. To give you some insight, consider Proverbs 31:4-7, which reads:

Verses 4 and 5 show us that “strong drink”, which could intoxicate, was unwise for kings to drink because kings need to maintain clear judgment in order to rule well. But verses 6 and 7 offer prohibition of “strong drink” to those who are under immense suffering, such as those dying in agony. Jewish tradition, likely based off of this passage, allowed for crucified criminals to take a numbing medicine that would help lessen the pain of execution. The drug myrrh would be mixed into wine and given to the crucified criminal as an act of mercy.

So why didn’t Jesus drink the wine mixed with myrrh offered Him?

At this point Jesus has already been betrayed by Judas, abandoned by his disciples, falsely accused by Jewish leaders, given an unfair trial, mocked, spit on, scourged, and he has carried his heavy cross all the way to Golgotha (the Place of the Skull). He is about to be crucified, and He is already in immense pain. Who wouldn’t want to take a little medicine that could help lessen pain at that point?

1) Jesus was determined to experience every ounce of suffering that God the Father ordained for Him on the cross. Christ embraced all the pain that He didn’t deserve on the cross because He trusted God’s good and perfect will to bring about salvation and glory through His suffering.

2) I think Jesus also made a bold and true statement when He chose not to drink the wine mixed with myrrh. Proverbs 31:4-5 says strong drink isn’t fit for kings, lest they drink and forget what is decreed. Although Jesus was being seen and treated as a blasphemer and criminal, He knew He was the Messiah-King, the King of Kings. By refusing to take the wine/myrrh, Jesus boldly and without words proclaims his kingship.

3) As the King of Kings, Jesus had some important decrees and judgments to make on the cross. He avoided drinking the wine/myrrh to ensure His clarity of judgment. For example, Jesus hands over his mother to the care of the disciple John (John 19:26-27). He prays for God to forgive the people crucifying him (Luke 23:34; see also verse 47 when the Roman centurion appears to be answered prayer!). He ministers to and redeems the dying thief on his side (Luke 23:39-43).

Jesus did not run from one drop of the pain he faced at the cross, even though He didn’t deserve to be punished for anything. He never sinned! But He embraced all of the hurt so that He could fulfill God’s will while on the cross paying for our sins. In stark contrast, I tend to run to different things and people when faced with pain and difficulty. Instead of trusting God to fulfill His perfect will through my suffering, I too often try to avoid my problems and deal with my pain in ways that keep me from obeying God (lust, lying, anger, just to name a few).

For this reason I thank Christ all the more for how He rejected escapism via wine mixed with myrrh, because He did it while paying for my sin of escapism. I’m encouraged all the more to run to the Father in prayer and embrace His Son, the Messiah-King, who didn’t run from pain in order to save me.

What were some of your thoughts as you heard my poem “Wine Mixed With Myrrh”? I’d love to hear from you!

Since the poem “Wine Mixed With Myrrh” is very literal, Eikon Media (@eikon.media), Savannah Lauren (SavannahLauren.com), Jon Doulos (@jon_doulos) and I decided to create a symbolic/metaphorical video. The storyline of the video goes in reverse, so the end of the video when I’m sitting with the wine and the bouquet of flowers is really the beginning of the story. The wine represents my remembering how Christ refused to escape His pain via wine/myrrh. The flowers represent all of the many ways I tend to try to escape my pain outside of seeking and trusting God. As I debate between keeping my flowers/vices or embracing what Christ did for me, I finally throw the wine glass down in a determination to let go of my once-precious flowers/vices. I trek down a difficult but liberating path of letting go of my flowers to ultimately run free of them. This is a picture of sanctification: the process of believers embracing and trusting Christ and shedding away sin that keeps us from sweet fellowship with Him. The shedding of sin occurs as we learn and embrace the Person and work of Christ.

What were some of your thoughts as you watched the video? Could you relate?

“…they gave Him wine to drink mixed with gall; and after tasting it, He was unwilling to drink.”
– Matthew 27:34

There You were,
bones unbroken
but broken with thirst
body open, no robe
just thorns, born to be torn
and crowned with the curse
naked for shame-sake
but you despised its claims
Your life wasn’t taken
You laid it down,
anticipating a reception of glory
a resurrection, a story
and You’re the star
but I’m
stuck on this moment
that struck me as holy
ground, I hear the sound now
of some spectators mourning
when You heaved
under torture,
at The Place of the Skull
and they…those soldiers…
they…

they offered You gall:
wine mixed with myrrh,
a bitter narcotic,
ironic: the wise men
gave it at Your birth
but hey,
perhaps they figured
Proverbs 31:6-7 recommended it,
since strong drink isn’t for kings
lest they drink and forget what is decreed,
(and…
and You? You could hardly be
the king of anything)
But, see,
for extreme cases of agony,
like criminals, thieves,
say, on death row in pain writhing,
it was written:
“Give strong drink to him who is perishing;
wine to him whose life is bitter.
Let him drink and forget his poverty
and remember his trouble no more.”

So
custom could afford
You to deaden some pain
so as to ensure You
would not buckle under strain
when nails jammed Your feet and wrists
thorns twisted, fixed
on the crown of Your body—ripped, stripped,
prepared for Your crucifixion—
none like this one—
justice being paid through substitution,
a weighty solution to our deep-seated pollution,
it stunk,
You kept Your dry mouth shut,
keeping from reviling those
unwilling and unable to see
through blind unbelief
the Messiah-King they traded in for their lusts, but
You, though certainly thirsty,
tasted what that gall was–
a sort of escape–
and did not take it.

It was like
You wanted Your senses not to be dulled by the sedative
so, consciously, awake,
You, the King,
using the full capacities of Your mental faculties
could speak life, Your eternal decree, to the dying thief
on Your side, otherwise condemned
like I, vile as he.