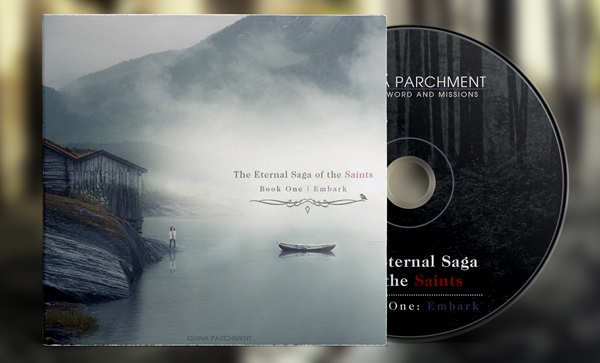 By Quina AragonJanuary 21, 2014No Comments

Here is the cover art for Book One | Embark from The Eternal Saga of the Saints, releasing 2/4/14. Designed by Jon Doulos jondoulos.com.

Definition (according to Oxford English Dictionary): to “go on board a ship”; to “begin (a course of action, especially one that is important or demanding)”

This release includes the first 7 tracks (we’ll call them chapters in keeping with the saga theme) of the spoken word project. You’ll hear part 1 of a feature from the multi-talented Joe Solomon of chaseGod.tv, as well as music from Bellarive, Ian McIntosh, The Frozen Ocean, and The Ember Days. All tracks with my vocals are recorded, mixed and mastered by my good friend and HGA’s own Derek Webb of Krellow Productions. Book One is entitled “Embark” because it highlights some of the beginning sentiments and experiences of the saint in the eternal saga. Chapter (track) one is a story about conversion, and so begins the saga…

You can embark, sojourn, & abide with me at www.QuinaisHidden.com 🙂