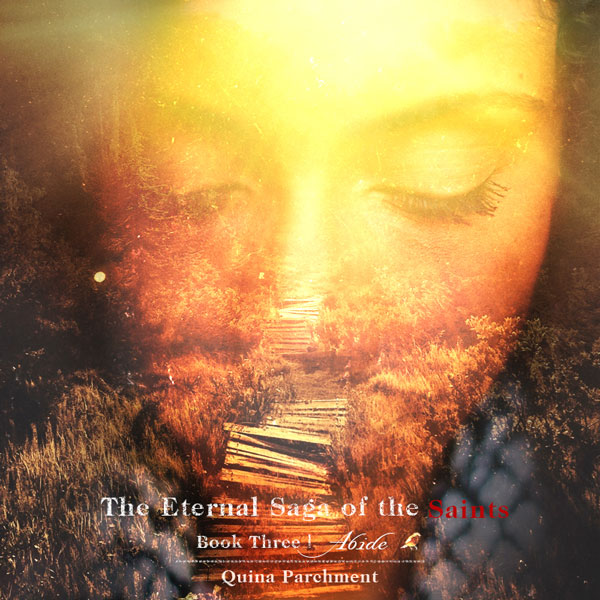 By Quina AragonApril 8, 2014No Comments

Book Three | Abide from my free spoken word project, The Eternal Saga of the Saints, is releasing today, 4.8.14, at QuinaisHidden.com. Feel free to share this graphic & info. 😀 Huge thanks once again to Jon Doulos (Jondoulos.com) for the Book Three | Abide cover art!

“Those who trust in the Lord are like Mount Zion, which cannot be moved, but abides forever.”
Psalm 125:1

“Abide in me, and I in you. As the branch cannot bear fruit by itself, unless it abides in the vine, neither can you, unless you abide in me.”
John 15:4

“And I heard a loud voice from the throne saying, ‘Behold, the dwelling place of God is with man. He will dwell with them, and they will be his people, and God himself will be with them as their God.'”
Revelation 21:3

The content of Book Three | Abide closely follows the apostle Peter’s encouragement in 1 Peter 5:10-11: “And after you have suffered a little while, the God of all grace, who has called you to his eternal glory in Christ, will himself restore, confirm, strengthen, and establish you. To him be the dominion forever and ever. Amen.”  So you’ll hear the saint’s fight to daily believe and savor the gospel of grace, the value of the saint’s suffering, and the eternal weight of glory being prepared for the saint. You’ll hear features from Joe Solomon from chasegod.tv, Ameen of HGA, and of course, Mari Conigliaro on the strings. You’ll also hear sounds from Ólafur Arnalds, Loud Harp, and The Ember Days.

If you haven’t already, listen to the saga by downloading Book One | Embark (released 2.4.14) andBook Two | Sojourn (released 3.4.14) from The Eternal Saga of the Saints at QuinaisHidden.comor quinap.bandcamp.com.

You can embark, sojourn, & abide with me at QuinaisHidden.com 🙂